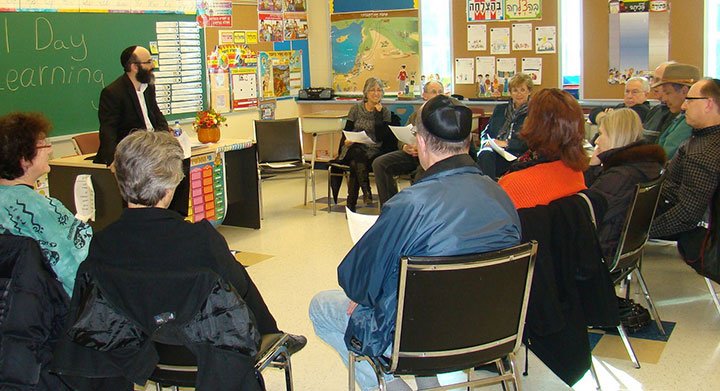 Adult Jewish Education at the Jewish Community Centre is a program of interactive, seminar-style Adult Jewish learning. Topics include the full range of Jewish experience: belief, philosophy, arts, culture, history, Israel, and the interface between Judaism and the rest of the world. The courses are pluralistic in nature and provide a comfortable and stimulating environment for Jews from all different backgrounds.

Early Bird Special: Register early and save! Please note that places are limited and will be reserved on a ‘first pay, first served basis’. All reservations received and accepted by April 20, 2021 will get a $15 discount. The Early Bird fee for this 6-week course is $130/student (regular fee $145).

Sonia Halpern is an Art Historian and a multi-award winning professor at Western University. Along with publishing academic articles, two collections of poetry, and a book of original music compositions, she has appeared in many local theatrical productions, and is a regular contributor to Jewish educational programs in London.   Sonia has taught courses for AJE since its inception, and has a passion for offering the Jewish perspective on a variety of art historical periods and styles.

This course will examine selected British Jewish artists of the 19th and 20th centuries who sidestepped a variety of conventions.  From Solomon Alexander Hart (1806-81) to the “Whitechapel Boys” (early 20thcentury), and from Hanna Gluckstein (1895-1978) to Lucian Freud (1922-2011) [yes, the grandson of Sigmund!], Jewish artists have contributed significantly to the British aesthetic in painting and sculpture, while facing some crucial obstacles.  We will discuss these artists in relation to immigration, anti-Semitism, and the British art establishment, and examine the extent to which their Jewish identification in Britain shaped their life and work.

The ‘Truth’ About Documentaries

Early Bird Special: Register early and save! Please note that places are limited and will be reserved on a ‘first pay, first served basis’. All reservations received and accepted by September 28, 2021 will get a $10 discount. The Early Bird fee for this 6-week course is $99/student (regular fee $109).

Pre – pandemic, Shlomo Schwartzberg was regularly offering courses at Ryerson’s Life Institute and the University of Toronto’s School of Continuing Studies, as well as various courses to a number of JCCs.  He is also the co-founder of and writer for the noted online cultural website Critics at Large (www.criticsatlarge.ca).

The ‘Truth’ About Documentaries:  Increasingly, documentary films are making a larger impact in the cinematic world. More of them have been released into theatres in recent years and there are TV channels and prestigious film festivals devoted to showcasing them. But what makes one documentary succeed where another one fails?  This course will examine how documentaries get made and why they, often, make the mark that they do. We’ll look at everything from cultural touchstones (O.J.: Made in America; and Michael Apted’s’ acclaimed ‘Up’ series, which followed a group of British kids, every seven years. from ages 7 to 63) to Holocaust documentaries (The Sorrow and the Pity; and Anne Frank Remembered), music films (Searching for Sugar Man; and 20 Feet From Stardom) and docs that can only be described as off the beaten path (Surfwise, about a Jewish surfing family).  The ‘Truth’ About Documentaries will provocatively examine the facts and, sometimes, the lies that reside in this particular type of art form.